Belmont has several year around springs, and many seepage's that usually occur days to months after a rain event. Incidental rainfall may run-off (to surface water courses/ drains etc) or be lost by evaporation/ transpiration (consumed by vegetation), or may infiltrate the ground surface through seepage via pores (e.g. sand), solution cavities (e.g. limestone) or fractures (e.g. basalt).  Water seepage passes through the unsaturated (vadose) zone to reach the water table (saturated zone) as recharge water, which may develop within an aquifer formation.   A surface area which conveys water to an aquifer is called a recharge zone. The City of Belmont’s recharge zone is Belmont hills and the hills west of Belmont. Crystal Springs Reservoir is also a major contributor to the aquifer.

Some water underlies the Earth's surface almost everywhere, beneath hills, mountains, plains, and deserts. It is sometimes difficult to locate or to measure and describe. This water may occur close to the land surface or it may lie many hundreds of feet below the surface. Water at very shallow depths might be just a few hours old; at moderate depth, it may be 100 years old; and at great depth or after having flowed long distances from places of entry, water may be several thousands of years old. 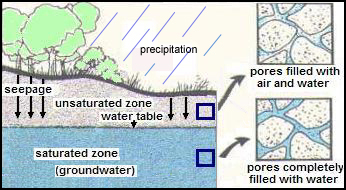 Groundwater is the part of precipitation that seeps down through the soil until it reaches rock material that is saturated with water or so dense that it acts like a dam. This groundwater then slowly moves underground, generally at a downward angle (because of gravity), and may eventually seep out through cracks in the pavement or into basements. Minor and major earth movement can shift the location of where the water seeps out. 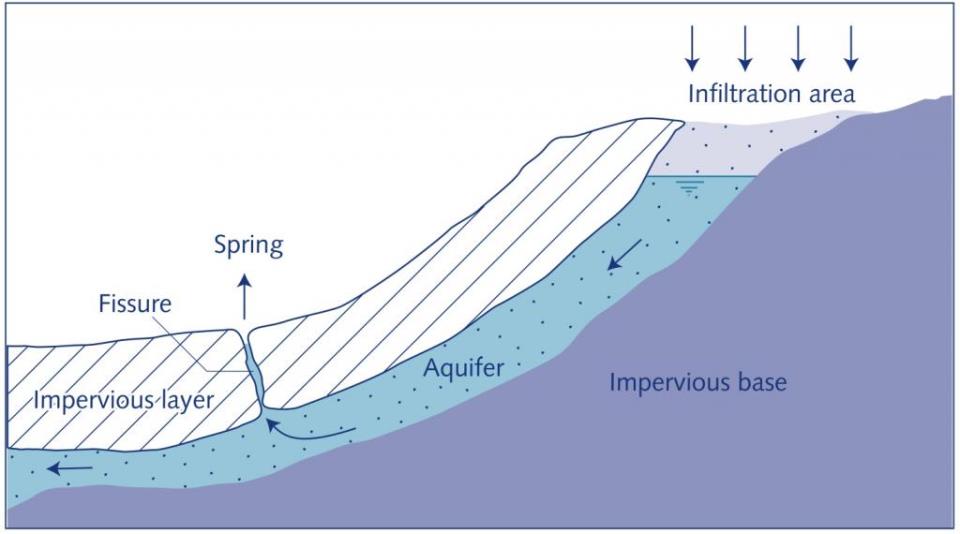 In many places, if you looked at a vertical cross-section of the earth you would see that rock is laid down in layers, especially in areas of sedimentary rocks. Some layers have rocks that are more porous than others, and here water moves more freely (in a horizontal manner) through the earth.

Try as it might, gravity doesn't pull water all the way to the center of the Earth. Deep in the bedrock there are rock layers made of dense material, such as granite, or material that water has a hard time penetrating, such as clay. These layers may be underneath the porous rock layers and, thus, act as a confining layer to retard the vertical movement of water. Since it is more difficult for the water to go any deeper, it tends to pool in the porous layers and flow in a more horizontal direction across the aquifer toward an exposed surface-water body, like the bay.